skip to main | skip to sidebar

Sup y'all?
I'm Bobby, I enjoy drawing and illustrating whatever my mind manages to conjure up so be sure to pop in every so often to see some new stuff! 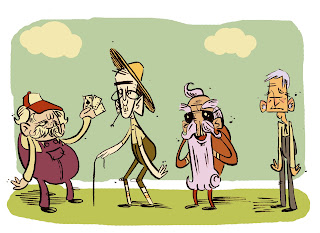 This little doo da was for my final typography project. We were given a short story about four little old men, we then had to illustrate an image that would work for a magazine spread. What you see above is the image that yours truly came up with. This was the first time I'd chosen to ink something traditionally and bring in some color digitally. This is also the first small step of me "bending" my style to something a little more elementary looking, but it's definitely very fun!

Next up we have some pictorial experimentation... 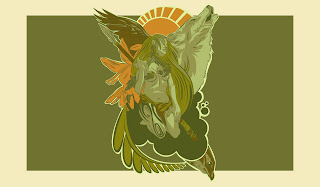 Only not really. Compositionally it's pretty experimental, but definitely not out of the norm for me, the fact that it's digital wasn't very "out there" of me either, as it's what I'm most comfortable doing. The piece really was just meant to fit a tribal theme, otherwise it was more or less me saying to myself, "Hmm...boobs, wolves, flowers and ravens, sounds neat let's draw it!" I think you can make a story for yourself just looking at it though.

I was pretty pleased with the results of these, I mean, I showed these at an interview I had at Red Tettemer studios as well as to the teachers I'd made these for and the response I'd gotten was nothing but positive.

Check back soon, I'll try and have the rest of the work I've done this semester up shortly!

Cynic With A Pencil Illustration & Design

Promote Your Page Too